A very nice and small caterpiller was roaming a small Garlic mustard plant, it is the Gypsy moth (Lymantria dispar) from the Erebidae family [1, 2].

A common species in the Netherlands but a new garden species that I hadn’t seen before.

At first I was wondering what the caterpillar was doing on the Garlic mustard plant since its foodplants consist of trees [2, 5], broad-leaf and conifer, which do occur in the neighborhood but not in the garden itself. It turns out that apple is one of its favorite foodplants [3] and the mustard plant was located under an apple tree. A closer inspection of the apple tree has not produced more caterpillars yet.

When encountering a caterpillar I always like to know which instar it is what can be determined through the head capsule [6]. The leaf the caterpillar is sitting on is still present on the plant and in good shap so I’ve measured the distance between the two nerves surrounding the head, which turned out to be ±3mm. The photo shows the head to be approximately half this length which points to a 3rd instar [4].

An orange mite near the neck is hitching a ride or enjoying lunch. 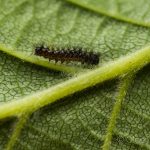 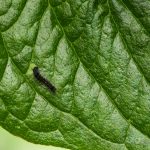 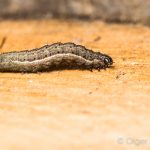 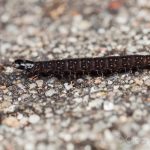