A remarkable appearance on the bee hotel, the Wasp beetle (Clytus arietis) [1, 2], a beetle species from the Cerambycidae family.

The beetle spend some hours walking around on the bee hotel. I suspect it is a female because the tip of the abdomen, which I interpreted as the egg-laying apparatus, was extended and she seemed to be using the organ to test sites for ovipositioning. It was put in cracks and in the holes of the hotel.

She inspected cracks in the tree trunks, the bark and once even went all the way into a tunnel.

Besides the front of the trunks the beetle was very much interested in the outside as well and disappeared regularly for a longer time between the trunks. Each impairment in the bark was inspected with the egg-laying apparatus.

A number of times she positioned next to a hole and lowered her abdomen inside, but in all cases I did not find any eggs on closer inspection.
It was obvious that she came to the hotel deliberately because two times she was chased away by a bee and dropped to the ground, only to re-emerge and fly up to the hotel again.
Towards the evening the beetle dissappeared between the trunks and I didn’t observe her afterwards. 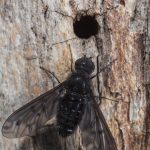