I found this wasp struggeling in an abandoned spidersweb  in which it had gotten entangled. Without a spider this would lead to a senseless death so I decided to release it from this abandoned trap. However it had probably been struggeling for some time already because there was not much life left in it afterwards. So I decided to collect it for the garden collection.

It is a female Lestiphorus wasp, Lestiphorus bicinctus [1, 2]. In the Netherlands there are only two members of this family that have been sighted, this one and another species that has vanished.

The family name is called “Button cicadae killer”, which refers to it’s primary characteristic, the way the first abdomen segment is positioned on the second, and the fact that they feed on Cicadae and this species on Spittlebugs (Cercopidae) [1] in particular.

This species is common in the most southern province of  Zuid-Limburg and in the east near the big rivers, and has recently (after 1980) been spotted more frequently outside those regions. [1]. So a somewhat special visito to the garden.

The identification of this specimen was difficult and involved numerous incorrect deviations in the wasp key [1] , as the result of the lack of clear key details in the  photoseries of the struggeling animal. Fortunately I remembered having collected it at that time and decided to prepare it first, see related articles. With all the details present the puzzle wasn’t easy but lead to a clear result.

It is a female what can be derived by the 12 antennae segments and the six abdomen segments.

The most important characteristics for Lestiphorus, for the male as well as the female [1, 2] :

The strongly enlarged and remakably shaped first tarsus from the frontal legs is to my amazement not an determination characteristic for this species or better the family. 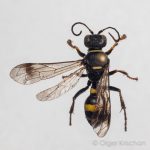