After numerous attempts in 2016 I succeeded in growing Sheep’s bit scabious (Jasione montana) and move them into the garden. It wouldn’t be long before a striking and very beautiful bee appeared: Gwynne’s mining bee (Andrena bicolor) from the Mining bee familiy Andrena [1, 2].

This species is recognizable by the long orange-red colored hairs on the thorax that contrast with the black abdomen and black head [1, 2]. I noticed the light blue-ish grey hairless spots on the hind leg knees, which can be seen in many internet photo’s of this species but apparently it is not a characteristic feature.
The black color on the bee has a darkblue-metal shine which I find very appealing. I had never seen this bee before and its dark appearance with the contrasting red hairs caught my eye immediately

The bee in the photo is a female which can be deduced from the lang orange colored hairs on the collection apparatus on her hind legs. In the following photo’s these hairs have colored pink with the pollen she has collected from the Sheep’s bit scabious flowers.

This species is common in the Netherlands, especially in the southern half, but it is the first appearance in the garden: a new garden species! 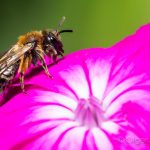 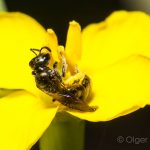 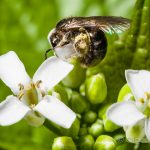 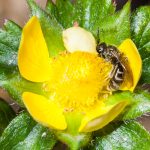