In the course of collecting caterpillar specimen on Catmint plants (Nepata spec.) some small and colorfull cicadae were collected as well. They are Leafhoppers (Cicadellidae) to be exact.

Using some sources1, 2, 3 the name of the species is found to be: Eupteryx melissae.

The insects are approximately 3 mm in size.

Besides adults there were a number of nymphs roaming the leaves. Based on the wing development4 it can be derived that these are instars 4 and 5. The nymphs have a white color but when they’ve just moulted they are yellow.

The photo’s below are sorted on instar, and it mentioned when the same specimen is depicted. 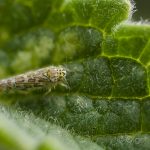 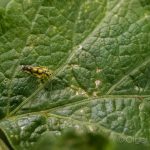 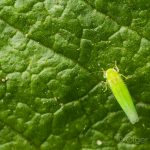 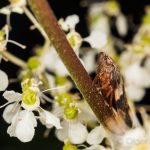