I found a cluster of insect eggs on a Verbana bonariensis plant that after some research turned out to be of the Green shield bug1.

The eggs were deposited on about 2/3 the length of the plant stem, and were very visible especially due to the color that made them stand-out in its surroundins.

After six days the nymphs became visible in the shells. The eggs are very nicely formed like little keggs with a lid. The lid shows a black triangle which outlins the labrum and sucking apparatus of the insect. The red dots are its eyes.

Eight days after first observation the nymphs came out of the shells, by slowly wiggling around gradually freeing itself.

Afterwards the nymphs sat there for days without moving, and when i examined them more closely they all turned out to be dead. No idea why.

Somewhere else in the garden I found another cluster of eggs on Dame’s rocket (Hesperis matronalis) with already freed nymphs that were hardening their skinns.  Unfortunately at next inspection they had all moved on so I was not able to follow their growth progress. 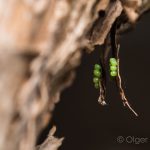 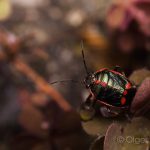 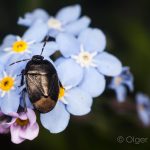 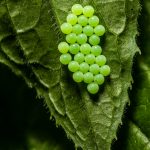