This holiday brought forth damsels, wasps and beetles, the latter including the impressive Stag beetle. Also there were some surprisingly beautiful flies, but only few butterflies,
Unfortunately a lot of the photo’s I took during our stay turned out to be duds. I had used super tele (420mm) a lot as it had produced good results on an earlier trip and also some subjects were further away and difficult to impossible to get close to. The 300mm lens with extender does its job but with a penalty on image quality especially under lower light conditions where larger apertures are required handheld. This all did not improve the quality of the photo’s. I’m shooting digital and did check the results but apparently miss-judged pictures I thought were okay but weren’t when looking on big screen.
Its a pitty because there were some nice species like the Beautiful demoiselle (Calopteryx virgo), Red-eyed damselfly (Erythromma najas) and Diaperis boleti. Oh well practice makes perfect, and in the end I still got some decent photo’s of my encounters.

We’ve visited a variety of locations, the best insect sources being:

This campsite was in the rural area and was surrounded by small woodland, thickets and streams, which were accessible from the campsite. Within the campsite flew many  Hummingbird hawk-moths (Macroglossum stellatarum) that also entered the campsite buildings… only to die there behind the windows. I’ve managed to collect some for my collection.

On the first night it already became apperant that there were many smaller sized moths flying about that came attracted towards the light. But also the larger and still rather spectacular Magpie moth (Abraxas grossulariata), and a Common glow-worm (Lampyris noctiluca) male. It’s potential partner I did not find during our stay here.

A fish pond in the campsite was frequented by Common bluetails (Ischnura elegans) but also a very large dragon fly that realy stuck out because of its size. Unfortunately I failed to get on photo as I only spotted it twice and it would not rest.

Near the pond there was a open area within the woodland where Speckled wood (Pararge aegaria) butterflies fluttered around, in this case the orange variant aegaria.

I left the area through the woodland and after strawling for a bit reached a large opening with a meadow where low and high herbs, bushes and jong trees were competing for space. Among this mass of plants different kinds of insects had found a home, among others the Map (Araschnia levana) in its darker 2nd generation colors, which was the first time I’d seen this butterfly in real life. Also the Magpie moth was here, this time resting within the foliage.
In a more open area with high grasses flew Five-spot burnets (Zygaena trifolii), Migrant spreadwing (Lestes barbarus) and Large skipper (Ochlodes sylvanus). The Spreadwing stuck out because of the bright cells in its wing tips. It was the first time I’d observed one. In that moment the spots and its size gave it a somewhat magical look and it somehow felt a bit out of place. The insect was very aware and weary for my gentle approach, silently displacing itself a little further everytime I gently moved a step closer. The Large skipper was aware too but turned out rather approachable and unimpressed by my close presence though.

On one specific herb were two large brightly turquoise coloured, yellow and black spotted caterpillars in the open. They were larvae of Water betony (Cucullia scrophulariae). Very pretty. Although the butterfly that will emerge from them is not very spectacular.

Near the cabin we lived in was a patch of trees whose trunks were covered with hundreds of  Red-legged shield bugs (Pentatoma rufipes) in all stages of growth.
The funny thing was that when I returned after a few days they had all but some left. Those trees must have  been really nutritious.

In the back of the campsite was an open field that was used as a dump for old wood, stones and cut grass in high piles like small hills. They were overgrown with herbs and plants, hosting numerous forraging insects.
Swollen-thighed beetles (Oedemera nobilis) eagerly ate the pollen of flowers and were completely covered in them. I hadn’t seen his species before. The thick thighs were remarcable, especially with the green metallic coating. Also the tapered elytra with the embossed ribs looked very classy. Small but very elegant creatures.

Also the Gatekeeper (Pyronia tithonus) was present with a number of individuals. These butterflies were everywhere this holiday.

Near the cabin I found a Wall brown (Lasiommata megera) on the ground basking in the sun.

And one afternoon a tree within the hedge surrounding the cabin was visited by a Stag beetle male (Lucanus cervus). And since we’re mentioning big beetles, earlier I’d found a squashed Sawyer beetle (Prionus coriarius) on a traverse in a busier part of the campsite. A real pity.

Fougère is a large old walled city with many ramparts, a moat and a flow, a real knight’s town. What is nice about the city is that the city counsil has created all these small patches of nature throughout the city in the form of small wild flower meadows and reet beds near water. They are all small patches but are frequented by nice insect species like the Blue featherleg (Platycnemis pennipes) and the fantastic Beautiful mademoiselle (calopteryx virgo). The photo’s of the mademoiselles are unfortunately not great, but I’ve added them anyway to get an idea of what they look like… even on bad pictures these damsels still look amazing!

And yet another encounter with a Stag beetle male!

Cap Fréhel was the best location we’d visited this holiday. A fantastic sloaping coastal landscape with steep cliffs and covered in raw nature. The ground consists mainly of hard red sandrock covered in high grasses and a low kind of pointy heath, really sharp. The heath covered the coastline for the most part and were flowering in purple and yellow. Some footpaths were carved through it. They were flanked by high herbs where Gatekeepers roamed.
The paths were inhabited by Beewolf (Philanthus triangulum) and its wasp parasite Hedychrum rutilans.

Beewolf females were patroling low above the surface sandy top layer and gauged it for suitable dig sites. The Beewolf is a digging wasp that captures bees. It will paralise the bee with its sting and then burry it in a burrow with an egg. After appearing the larva will feed on the bee.

Finding an appropriate dig site is apparently not an easy task as the wasps consumed a lot of time doing this. Every now and then they would land and start digging a bit, showing her belly and tail sticking out of the ground, only to re-appear and move on a little further to try a different spot. Then returning again to the previous.

The males were roaming from grass root to grass root near the edge of the paths. The insects fly remarcably slow.

In the meantime the digging wasps are often observed by the brightly colored emerald wasps whose larvae are parasites on the Beewolf larvae. Everytime the Beewolf flies away the wasp will move forward to the hole and start investigate it. Sometimes entering it.
The females are beatifully colored in metallic red with greenish-blue patches that will light up brightly in the sun. The males have a metallic greenish-blue thorax with a red metallic abdomen.

The area harbored many of these wasps. Also near the cliff edge where there appeared to be no Beewolves, many individuals were patrolling just above the ground every now and then landing to inspect something.

Near the cliffs this creature suddenly appeared. I had not seen anything like it before and suspected it to be an unusual ant, albeit an odd and furry one. The animal was approximately one and a halve centimeter in length and scurrying fast paced on the ground.

Looking it up at home it turned out the be a type of wasp called Velvet ant (Mutulidae), which looking at their appearance is a very appropriate name. The females in these wasps are wingless and live on the ground. The wasp is a parasite on bumblebee.

Cap Fréhel was a very nice area that I’d like to visit again (espacially due to large amounts of dud photo’s aarrgh!).

The second location where we had a cabin was in Normandy near the village Saint-Aubin-des-Préaux. As we arrived here I already noticed that the roadside wild flowers were covered in yellow-black caterpillars. That looked promissing. But during my first expedition I’d strained my back  and that was more or less the end of photography this holiday.

During our stay I had some stralls and during one of them discovered the feeding spot of a bird. Spread over a small area under a tree lay multiple Stag beetle heads, males and females, which are now a nice addition to my collection.
Also during a visit to the village Gratot which harbors a very unique small castle, I encountered yet another Stag beetle, a female this time. On the parking lot fluttered a Jersey tiger (Euplagia quadripunctaria), a diurnal moth from the Owlet moth family (Erebidae). These were the concluding encounters of this excellent holdiday! 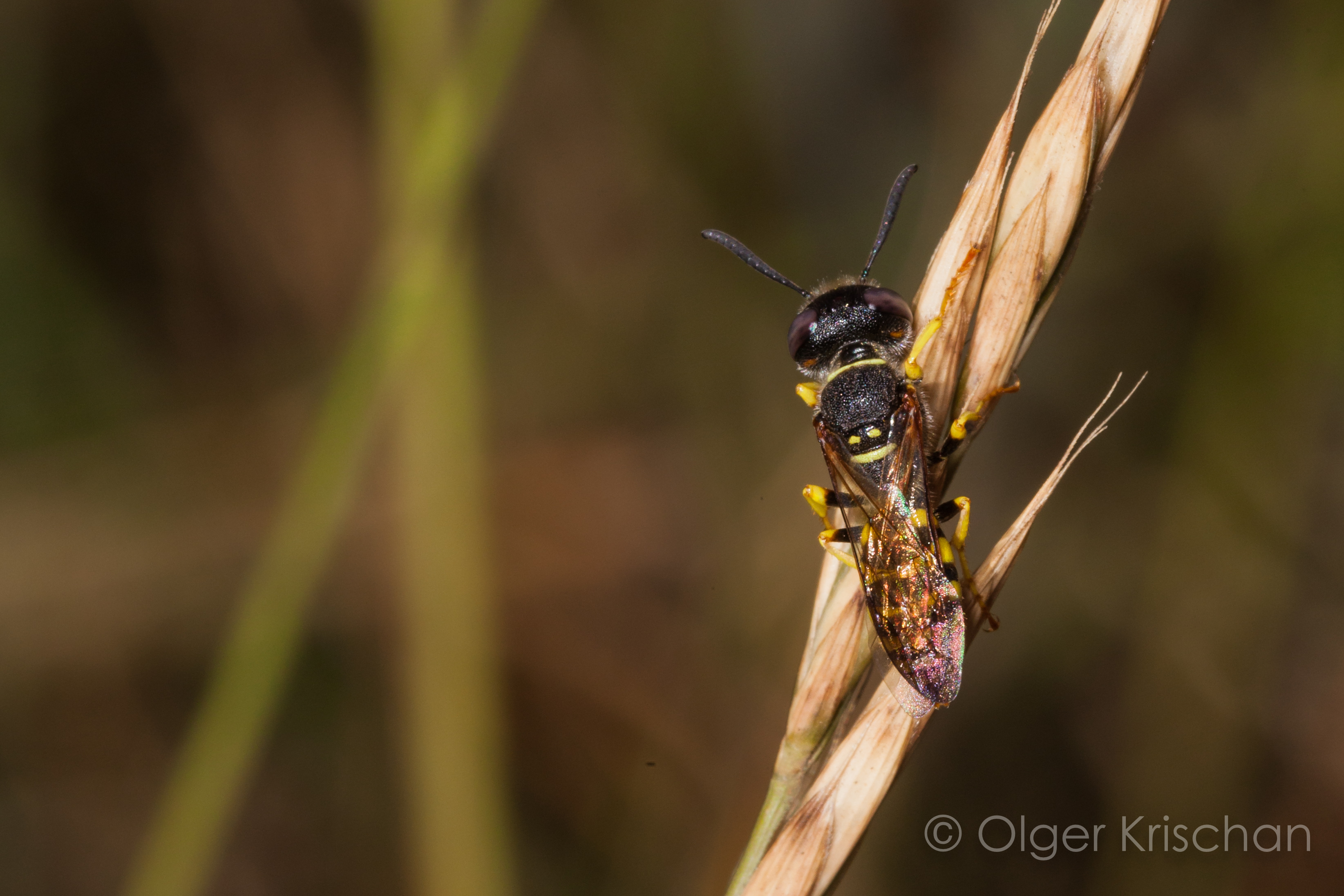 In Bretany we’ve visited the off shore bird colony at les Sept Îles. An amazing experience! So many seabirds and an staggering amount of Northern gannets can be found here. There were even two peregrines. This site is worth a visit should you be in the neighborhood. 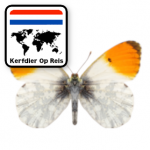 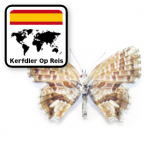 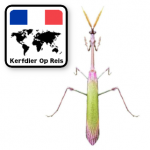 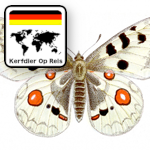