The side window provides a view on a butterfly bush in our garden that functions as a feeding station for birds. The old bush has always been cut so it would create a large stem with thick branches. Like other bush when a branch dies in winter the lower thickest part is not removed so it can function as nesting substrate.
This strategy proved successful this year. Through the window all kinds of activity was visible around a thick dead branch. Different diggerwasps species were investigating what probably are old beetle tunnels.

This female Stigmus pendulus had been satisfied by the work of her coleopteran predecessors as she was clearly excavating one of the boreholes. The species seemed to prefer boreholes near the shadowy underside of the branch (shown by the dashed line in the photo above right). Higher and more sunny boreholes were not visited by Stigmus, others like Crossocerus and Passaloecus did.

This small species has not observed before and is a new addition to the garden, a new garden species!

The female was accompanied by at least one male. 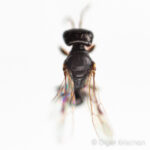 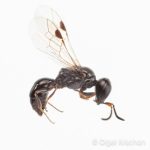 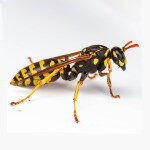 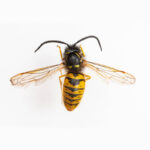