A male Europen beewulf (Philanthus triangulum) [1] digs a sleeping place for the night.

At his landing spot he gave a stone in the sand a lot of attention. He tried to move it by pulling it with its teeth and digging around it. However this cause it to tilt and sink further away in the sand. It revealed a space behind though.

Judging by the relocation effort the wasp in I suspect the stone was the cover of a sleeping place it had dug earlier.

After toiling a long time it became clear to him the stone was there to stay and he started digging a new sleeping place next to it. The white stone is visible behind the wasp in the photos.

It’s new temporary home was closed from the inside with sand.

The next afternoon the new location turned out to be covered by a stone as well. 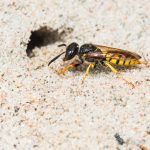 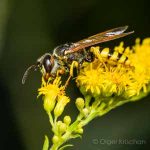 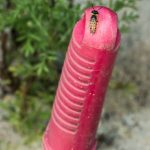 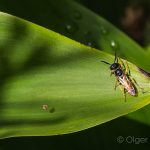