This female Pemphredon lugubris [1] was clearly interested in the Hemp agrimony (Eupatorium cannabinum) stems in section II, nest block 10 of the bee hotel.

The reason for her interest did not become clear. Females can be seen on bee hotels where they may collect nesting materials like pith from plant stems [2]. That could certainly be the case here, the species is active until the beginning of November [3] and overwinters as pre-pupa [2,4].
It could be possible she was looking for a nesting place as the species is known to nest in plant pith, but whether that includes artificially provided stems I have not been able to find any references on.
Another possibility that involves finding a resting or sleeping place seems to be unlikely as it was still the beginning of the afternoon, and typically digger wasp females do not sleep in bee hotels. The females of another Pemphredon species, P. lugens, are known to sleep in their nest under construction [2].

I’ve caught her for identification, see here. After release i’ve not seen her back on the bee hotel. 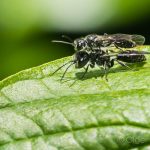