At the end of the day around 18:00 this pompilid female Caliadurgus fasciatellus [1,2] actively wandering the area near a stone wall in the garden. It turned out she had caught a spider which was lying uncovered on the ground to the right of a flower pot. After checking the spider she continued roaming the area in and surrounding the flower pot. The fact that she chose different locations, for example between the stones of the the wall, and between the side of the flowerpot and the earth inside it, makes it probable she was looking for a suitable spot to built a nest and not relocating a prepared nest location.

During less than an hour she checked out all kinds of holes, crevices and spaces in high gear. Within that period of time she contacted the spider five times.

After four minutes she appeared without the spider via the stone wall behind the flowerpot. The space between the backside of the flowerpot and the stone wall turned out to be the residence of a large funnelweb spider which provided some comic relief as she appeared in one moment to check out the ruckus only to fall back into the safety of the darkness of the cavity when she saw the wasp. The wasp entered the same darkness a little later without hesitance.

I’m assuming she established the nest behind or underneath the flowerpot in the sand between the tiles since the prey was not seen again, but this must have taken place within those four minutes which seems to me a very short time. Typically the burrow consists of a tunnel of about 2 centimetres in length ending in a brood cell that is closed after being stocked [3].
After roaming about for another fifteen minutes she flew away and did not return.

During transport the spider was mainly held at the cephalothorax-gaster connection.

On some of the photographs it seems like the spider is manipulated by pulling the coxa.

The prey was always left behind uncovered and in the open, on her back or side. She was complete; none of the legs had been amputated.

The Caliadurgus fasciatellus prey spectrum consists of several Araneidae [3,4] which includes Zygiella x-notata, but I’ve not been able to find direct references to this prey species. 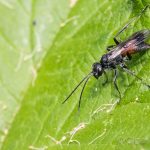 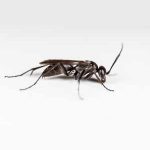