An unidentified female Gelis sp.. This encounter occurred during the observation of another nest building wasp as well. Here she is still roaming on a distance, but gradually she reached my position.

However once close she crossed rubble on the ground with which she optically merged rendering her undistinguishable. At the time I’m processing the photographs two months later I had to really look carefully to find her, for a moment leaving me with the impression the pictures were duds without the wasp… 😅 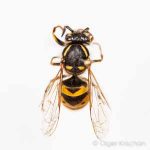