This small bee crawled on the ground with it’s wing spread out and gave the impression like it was wounded. She crawled on my hand without hesitation. Up close it was clear this was a female Coelioxys bee. There are a number of species in the Netherlands with such a sharply pointed abdomen but most of them are larger.

Barely tippiong 8mm she is rather small for C. elongata and C. inermis. I wondered if this could be a C.mandibularis female as those start with a length of 8mm.

With the help of an expert, see here, it is determined as C. Inermis [1] (det. Albert de Wilde), a new garden species!

Compared to the C.elongata female that was present in the garden last year the jaws on this specimen are more angular which also made me think of C. Mandibularis, but the angle on those jaws is more acute.

The species page on the Nederlandssoortenregister describes the jaws of C. inermis as weakly angular what suits this specimen.

Besides her non-typical length she had a malformed tegite 4 as well.

In the field the bee caught my attention because of her aberrant behavior and also during the photoshoot she moved slowly and had a pair of both wing pairs hanging next to her body, typically an indication it is not going well with the animal. After all photos were taken I decided not to release her yet but instead help her recuperate with some rest and some food. But by morning she had died.

I’ve added her to the garden collection, see here. 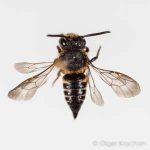 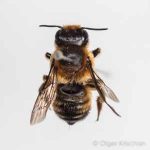 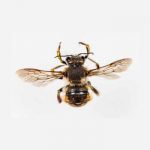 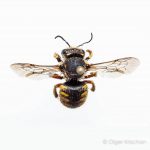