Here she just emerges with material to be dumped between her jaws.

During my observation time she left the nest three times returning after some time at least without prey but I could not see if she might have carried building materials.

The nest was located in one of the highest drill holes in the covered nesting block close to the overhanging nesting block.

The theory behind the nesting block construction has therfore scored an important point. The days following the initial observation were very wet and it was not possible to follow the activities and when the wheather allowed to sneak a peak she was not visible. i assumed she would be idle and waiting for better weather to resume construction but now 6 days later (11/viii/2021) the nest is closed with clay! 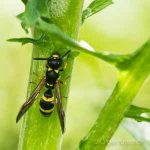 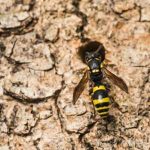 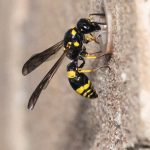 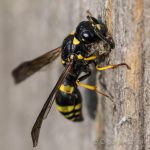