This female Ectemnius cephalotes appeared around 14:30 at the bee hotels where she started to inspect nest holes. I suspect she was looking for a place to sleep or shelter for the weather as it was still early. My presence seemed to bother her so in the end she took off.

On 4 July I was busy with a Trypoxylon figulus wasp at the bee hotel when another Ectemnius female appeared and landed on the nest block, possibly the same specimen. I wanted to catch her but she immediately entered one of the nest holes. This was around noon and shortly after it started to rain. 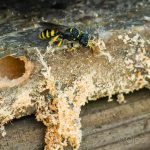 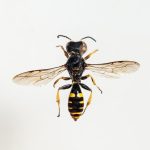 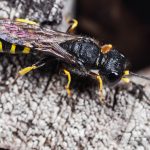