I noticed a female Ectemnius continuus [1] building a nest in the old wood blocks.

The nest entrance was located on ground level at the side of the wood block. After some time she moved a little further and started building a second nest, but ultimately she left both locations.

She remained inside the wood block for long stretches of time and appeared every now and then to push out wood material from the nest. She alternated doing this backwards with her legs and forwards with her face.

At a moment when the female wasp had left the nest for some time a small fly passed by that immediately returned in a u-turn an landed in front of the nest. It approached the entrance and inspected the opening. After a short moment it entered carefully only to rush out after a few seconds like she sensed the lurking danger of getting caught by the wasp. After that she disappeared.

Via the waarneming.nl forum this turns out to be a flesh fly (Sarcophagidae) from the genus metopia. This group consists of cleptoparasites on numerous wasps and bees, among others digger wasps (Crabronidae) and specifically Ectemnius [2,4].
The fly is described to display a characteristic inspection posture where she will sit in front of the opening head towards the entrance [2], which may be what this fly here is showing.

The female fly has a special pouch in her abdomen in which eggs are hatched to first instar, which are deposited inside the host nest [3]. The first instar will then seek out the food storage of the host and eat it [3].
It is unclear whether the host larva starves to death or is killed by the parasite [3]. 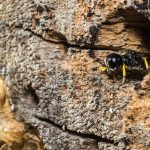 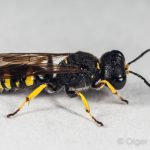