One running mission of mine is to get the Blue mason bee (Osmia caerulescens) [1] to nest in the bee hotels. So far that has not happened yet, but this female was clearly busy building one.

She is gnawing a piece of Common mallow (Malva sylvestris) leaf, starting from the edge inwards, and it looks this isn’t the first time she has been on this leaf. She does not cut a well defined piece of leaf like leafcutter bees do but instead is sort of scraping the leaf material into a ball. The material is cut into a paste and used to make the bulkheads between the brood cells [2,3].

I’m keeping an eye on the hotels. Every now and then a female will be sitting in an opening but they seem to be resting a bit, not nesting. 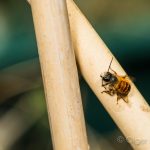 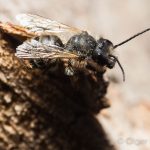 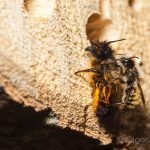 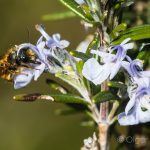