Up till now I’ve been able to welcome a growing list of Digger wasps to the garden. The majority of which are males though. So to attract more species and also facilitate the females I have made a number of changes in the garden.

I thought to create a hill which serves as a potential nesting site so the ground nesting females actually have a reason to come. A sunny piece of garden on the south has been sacrificed for this. I dug away the soil about 40cm deep and filled the hole with sand.

For the wood nesting species I had some old trunks in the shed whose inside turned out to be too soft and unsuitable to drill nestholes for a bee hotel, and placed them on the ground on two locations. Hopefully they become suitable nesting material once the decay process takes off and the wood becomes soft enough for the wasp to gnaw their way into it.

It should work since similarly I had placed some old, replaced bee hotel blocks on the ground two years ago and last year these attracted two not identified digger wasp females.

To finish of the initiative I’ve seeded some umbellifers so there will be more foraging opportunity for the wasps as well, i.e. Carrot, Parsnip and Fennel. These plants are mentioned regularly as a nectar source for wasps. I hope the seeds will grow as my luck with that is rather unpredictable.

The season may begin 🤞😊 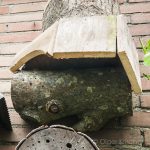 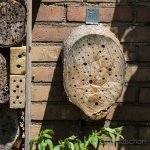