In the 2016 published paper by Niklas Johansson and Kees van Achterberg [1] the authors describe three Gasteruption species that previously were defined as the species Gasteruption assectator.

When there is a suspicion that about a species that it may actually include a number of species this is referred to as a species complex, informally also called a species aggregate [2].

Based on newly found morphological characters it turns out that Gasteruption assectator actually includes the following three species:

The species are identified based on the following morphological characters [1]:

In the field these characters will be difficult to identify, especially characters 1 and 2 as they are accessible ventrally and character 5 is visible under appropriate enlargement. The other characters can be accessible in principle on good and sharp photographs.

On this site a species from this group with unclear characters is for the time being categorized as ‘Gasteruption assectator agg.‘ instead of ‘Gasteruption sp.‘ to make emphasize this background.

G. nigritarse has been found in the East and South of the Netherlands [1] and therefore a less likely candidate as future garden visitor here in the West.

G. boreale has been found in the vicinity and can be a potential candidate visitor.

G. assectator is present in the garden. 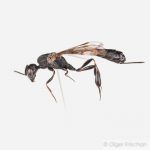 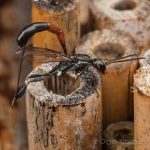 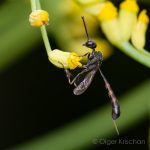 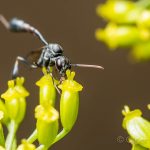