I saw this mining bee flying slowly and landing on Rose campion (Silene coronaria) to drink a sip and groom herself. I tried to approach her slowly but she quickly took off and vanished.

She is somewhat off because the hairs on the front of her face are light. After some digging I found this  paper on the Euandrena subgenus which includes species with the same superficial characters as the one in the photographs, among them some very rare species:

What doesn’t help is that my photographs are mediochre in quality and do not show details, especially on the face.
A number of experts looked at it on Waarneming forum and the end conclusion was that it probably is a lighter variant of A. bicolor, normally the face has darker to black hairs.
The alternatives did not match based on either appearance (2, 4, 6), location (5) or activity period (4).

I did some measurements around the ocelli and compared them to this specimen which matched A. angustior, however the expert indicated that this method is very unreliable especially when applied to photographs so it didn’t yield a result.

Oh well, it was some nice detective work and it gained me more knowledge. 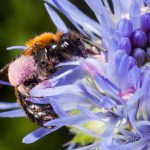 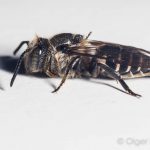 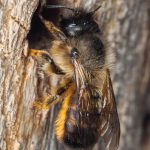 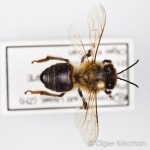