The new season start well: a new garden species in the rare Sawfly Abia lonicerae! [1] (det approval Fons Verheyde on waarneming forum). It is a female.

I hadn’t seen this insect ever and at first took it for a foraging bee. A very golden bee… a bit odd, also with those strange antennae. It was foraging for nectar on  Garlic mustard and was didn’t really stop moving even though being sluggish. Before I had the opportunity to take a good photograph it flew away, aaargh!
Fortunately shortly after she returned to the plant and sat down to rest a moment on a leaf. The open wing position next to the body confirmed my suspicion that this was not a bee.

The species post includes the identification of the species based on the antennal segments when compared to the very similar looking A. aenea. 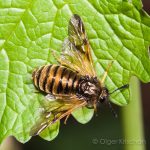