A very nice looking wasp that visited the garden for the first time this year and did it in large numbers. I have to say my photo backlog turned out to contain three different species of black-yellow ichneumonids which I had judged all the same species while observing them as they look very similar with subtle differences.

The wasp were continuously patrolling the garden are rarely took a break. After some time my photo taking response times increased on those rare moments where they sat down. The patrol area covered a large part of the garden. They could be found walking around on and around the stacked stone walls where they were clearly hunting, judging by their behaviour which involved inspecting every crack and space between the stones. 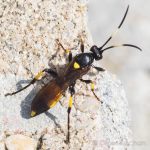