A very special new garden species this time!!
At the end of the day I saw two small wasps struggle in the waterfilled wheelbarrow. It was clear that they were ichneumonid wasps but which ones.

I couldn’t figure this one out so I called in the help of the Waarneming.nl forum where admin Fons Verheyde identified them as a pair of the ichneumonid wasp Baranisobas ridibundus, a rare species in the Netherlands.
See for the female here and for the manle here.

What makes this find even better is that according to him it is this could well be the first time the male has been photographed in the Netherlands and Belgium!!

Here they can both be seen grooming the water of their bodies. The female has a deformed right wing with a fold to the left in it. Unfortunately her photographs are rather bad.

I’ve received an update from Fons Verheyde on the observation in Waarneming.nl informing me that it concerns a different species from the one established earlier (see above), a female and, possibly, a male, Apaeleticus inimicus.

The genus Apaeleticus has four representatives in the Netherlands [1]:

It is a good practice to look for reference material to train the brain after receiving a positive ID on a species. But as is more often the case when dealing with an ichneumonid wasp the amount of available information can be minimal. I did manage to delve up some publications with good photographic material on some of the species:

The Ichneumoninae key [Tereshkin] [4] leads to the tribe Platylabini via these characters:

A number of characters are not visible in my photographs but by making assumptions to see how the key resolves and by removal of genera that do not occur in the Netherlands a result can be found.

Based on the photo references my female seems to visually fit A. inimicus, and does not resemble the photographic sample of A. mesostictus [PUB-6] and A. bellicosus [PUB-1]. Unfortunately no information could be found on A. haematodus.
The morphologic characters in the species description in [PUB-3] en [PUB-5] cannot be checked for some parts due to the poor quality of my photographs that lack the necessary details, but the following characters match:

5. Front wing with pentagonal areolet, wide base, narrower in front

10. Reddish color with ivory white pattern on posterior edge pronotum (P), subalarum (S) and scutellum
(Note: scutellum is ivory white in my female and all references, but is not specifically mentioned as character)

12. Tegula and all legs red

One thing that kind of bugged me has been resolved with the new species: the fact that the ovipositor was not visible on any of the photographs where it could have been. This fact kept some doubt in my mind concerning the positive id on B. ridibundus, as examples on the web showed a clearly visible, rather sturdy ovipositor.
This can now be explained because in Apaeleticus females the apical tergites are almost always hidden within tergite 5 and are therefore not visible [4, PUB-3, PUB-5], and the ovipositor does not protrude [4].

The Ichneumoninae key [Tereshkin] [4] leads to tribe Platylabini via these characters:

The Platylabini key [4] leads to genus Apaeleticus via these characters:

I could not find any reference photographs on the male A. inimicus. The photographs of the male A. bellicosus look rather similar to my male. According to the [Perkins] [3] key the difference between the two species are:

The postpetiole in my male does not match the description of A. bellicosus, and looking at the punctation in the photographs in [PUB-2] en [PUB-3] it is clearly different than the smooth surface in my male.

So in conclusion it is too bad the species is the uncommon A. inimicus instead of the rare B. ridibundus. Probably the scoop for photographing the male for the first time in the Netherlands and Belgium does not count here, but since there is no photographic material available yet it still feels a little like it, and they still remain beautiful little wasps. ✌️😊 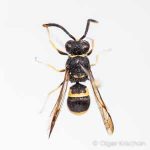