The wasp Ectemnius cavifrons [1] is uncommon and occurs throughout the Netherlands [2].

The species is active from half April up to end September [3].

Her widely branched nests are gnawed in rotting and dead wood [3,5], but old tunnels from a previous season can also be re-used [5].
A nest location can reside in a completely shades location [9].

The nest starts with a straight corridor that branches after several centimetres in up to thirteen side corridors that can reach 30-70 cm in depth, sometimes even up to 120 cm [5]. At the end of these tunnels a brood cell is located that measures 8-10 (h) x 12-15 (l) cm [5].

Two females may use the same entrance but each will gnaw it’s own corridors [5]. It is also possible that numerous females will nest in a nest aggregation [10].

The larvae are fed flies, about 6-12 prey species per brood cell [5].  After the brood cells are filled the corridors are filled up with wood pulp [5].

One generation is produced per year, but in long summers two generations are possible [5].

Sleep and shelter
The males will use the bee hotels as sleeping place [6,9]. Occasionally a fresh female without a nest may do so as well [6,9].

On numerous occasions I have observed how a male that is searches for a suitable spot will hang around the hotels for quite some time, land below an opening, throw a quick glance to inspect the potential spot and take off again. He will land with the antennae directed towards the entrance to sniff it out and crawl head first partially, or entirely inside.
It can take a large part of an hour before the right spot has been found, in which case he will crawl out backwards from the tunnel, turn in front of the entrance and crawl in backwards again so it’s head is pointed towards the entrance when inside.

Agression
From my own observations it turns out that the males looking for a spot on the bee hotel are agressive towards the other bees and wasps on the hotels. When they see an insect they want to scare away they will align themselves in the air with the victim, shoot forward quickly and crash into them. They seem to do this especially with insects near holes in order to scare them away. But they will also attack insects approaching a nest hole in flight. Especially European wool carder bees (Anthidium manicatum) are targeted although these do not seem to be impressed by the harassments.
I have caught a few of these agressive males for identification and they were all E. cavifrons.

The males will look for females either actively or passively. In the latter case he will wait in the morning on a sunny leaf on which he put a scent-marking, until a female will pass by [9]. The scent-markings are deposited on the leaf by dragging with their abdomen [9].

On the warmer hours of the day he will actively patrol nearby suitable nest locations for females suitable for mating [9].

Once a female is located he will land on her back and grabs her above the wing base with his middle legs [9]. The front legs are resting over the female’s head with the tarsi along the inner eye edge. As long as the female keeps her wings closed the male will keep his body straightened and his hind legs bend alongside her body so they do not touch the wings [9].

The way he embraces her wings makes it possible for her to still use them, and they may fly up together during mating [9].

When the female opens her wings he will extend his abdomen exposing his genitals, and simultaneously she will bend her body upwards so the genitals meet [9]. Mating may take as long as a few seconds or many minutes [9]. after which the bond of the genitals is broken and she will close her wings again [9].

During mating the males keeps his jaws open so the long palps rest on her stirn and the front legs still positioned in the inner edge of the eyes [9]. During this process the antennae are positioned parallel and downwards with those of the female between them [9]. The shape of Ectemnius male antennae often have rather deep recesses will help to lock them with those of the female [9]. This recesses are species specific [4,5,9], and may have a function during partners selection by the female [9].

Crabronidae females probably mate only once [15].

The female has a area in which she will hunt for prey. Throughout it she has a number of lookout positions that are located at the height of the flower horizon or lower looking so she can observe the flower visitors [9]. The outlook positions are used alternately during a period [9].

Like all Ectemnius females she may also actively hunt by flight, during which she will slowly cruise through the herb layer hovering still near flowers [9,15]. When she has spotted a prey she will slowly approach and, in case of a positive identification, explosively accelerate towards the prey and grab it with open front legs and mandibles [15]. This is learned behaviour that she will learn by trial and error [15].

The hunting area may be shared by multiple females [9]. In the rare occasion two females want to use the same outlook position, the new arrival will bump into the present female which will be followed by a staring contents in which the looser will take off [9].

The female will respond to a potential prey when it enters her field of vision which extends from a few centimetres to about 2 meters [9]. Small insects she will follow by moving her head, larger insects and those on flowers will have her take off to have a closer look [9]. On a distance of about 4 centimetres she will determine if she has found a prey, when positive she will accelerate explosively and throw herself onto the prey and grab it tumbling down to the ground and land somewhere in the foliage [9].
It is not clear whether she will use her sense of smell to recognize prey [9].

The females will keep the caught prey perpendicular underneath her body with her hind and middle legs so the head will extend on one side of her body and the abdomen on the other, the wasp’s sternites are positioned above the thorax of the fly [9]. Grabbing herself with the front legs she will sting the fly in the chest [9].
When the fly is paralysed she will turn it underneath and align it with her abdomen, the abdomen of the fly sticking out underneath her abdomen [9]. During flight the middle legs clamp the neck and the hind legs are used to stabilize the prey [9]. The free front legs are use during landing near the nest entrance after which she will drag the prey into the nest [9].

A hunting sortie will take around 10-15 minutes and when the wasp returns on the nest she will exit for the next sortie in 30s to several minutes [13,14].

Adult wasps feed with nectar. The following plant groups and species are cited in literature as food plants:

The garden offers some Umbellifer species but I haven’t observed any Ectemnius species on it yet.

The species ise flies as food for her brood [3,4,5,7].
The following prey groups and species occurring in the Netherlands [1] are cited in literature:

The following prey species have been observed in the garden:

The following parasite groups and species occurring in the Netherlands [1] are cited in literature:

Another category of parasites are mites which will not further be investigated here. The males often have one or more clusters of these arthropods cling to their bodies, like this one. The mites are attached to the armor and wings and are present all over his body, especially on the abdomen.

The genus Ectemnius can be identified using the following characters:

5. Side thorax (mesopleuron) has a short, angular or curved transverse keel in front of middle coxa [4,11,12].

8. Top of the smooth area above antennal base not confined by a transverse keel [4]

7. Underside mesothorax frontally without transverse keel, only developed at the sides [11]

Sternite 7 is also, to a lesser extend, remarkably gutter-shaped, but this is not a character for the species.

13 PICKARD, R. S. Relative abundance of syrphyd species in a nest of the wasp Ectemnius cavifrons compared with that in the surrounding habitat. Entomophaga, 1975, 20.2: 143-151. 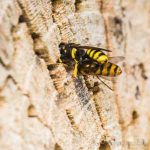 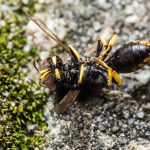 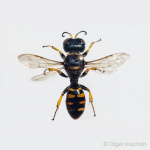