Hi! Welcome to kerfdier, a blog about the ‘kerfdieren’ encountered in my garden and during my travels.

The word ‘kerfdier’ is a synonym for insect that has fallen out of favor in contemporary Dutch, and is for me a synonym for self-interest. Either for the individual or for the group as a whole. They ignore each other, don’t mind each other and bug each other because they have to or just because they can. Apart from that they are also very curious and will frequently observe you as well, which sometimes can seem like an interaction.
Insects have interested me from a young age, ever since I found my first beautiful dead insect: a Longhorn Musk beetle (Aromia moschata). Ever since, observing their appearance and behavior has interested me. Often I’ve wondered what they are doing and why, for example when an individual remains for days in the same spot without moving, or visits the same flowers or nesting holes over and over like every return is the first time. 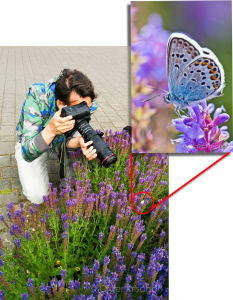 Photography is a hobby of mine and I like capturing the insect behavior on film, or to be accurate on ssd, which is the main reason to maintain this blog. I like to present the individuals in their natural environment, presenting them and their characteristic behavior as dynamic as possible in such a way that the individuals ‘personality’ appears.
But on this site you will also find ‘lab’ photo’s that are made in controlled environments to show the details in the best possible way. These photo’s will be apparent by their looks (white background for example) or the textual context (for example during breeding).

Traveling offers me an opportunity to go out into the bush and submerge myself in their world. I collect the dead specimen that I find for my collection. There was a period when I would catch specimens but I prefer to observe them alive and besides with the increasing pressure that this group is under I find it irresponsible as an interested party. Collecting has now become more of a sport for me, as it is not easy to find a dead specimen of the local specials, but I’ve had some good success so far.

To attract more insects to my garden I’ve started making it more attractive to them by growing indigenous wild-flowers. I’ve had varying degrees of success so far as my fingers aren’t green enough yet.. But I’ve seen a gradual growth in numbers and diversity.

My primary groups of interest are bees and bumblebees, and butterflies as these groups experience the most pressure nowadays. Besides those I’m interested in wasps, beetles and grasshopper/bush crickets. My favorite insects are praying manti but even with todays global warming trend chances are they won’t show up in my garden. All specimen I will try to determinate and the dead specimen I’ll add to a garden insect collection.

In this blog you will find information about the visiting insects, their (remarkable) behavior and the nectar and host plants that attract them. Besides the insects other topics like development the garden and its results, collection and preparation methods and photography will be discussed at times.

My aim is to create an informative and entertaining blog that may spread some bewilderment and make us care a little bit better about our kerfdieren. I’m happy to hear what you think.