Before the rise of DNA profiling, morphological characteristics were the primary way to identify most insects.

In bumblebees the color pattern is an important characteristic [1]. There are however species that have the same color patterns with subtle differences that make it difficult to separate them. Such species are called cryptic species. In the Europe region there is such a group that contains important pollinators:

The species marked with ‘Lucorum complex‘ make up the Lucorum complex, a group of species that resemble each other in such a way that it has been long debated in the past whether there were one or more species involved.
With the development of DNA profiling many bumblebees have been re-analysed and this yielded the confirmation that the Lucorum complex does indeed hold separate species [2].

However the DNA analyses also showed that previous determination based on morphological traits were wrong and species actually belonged to a different species [2]. This fact raised the question how reliable determinations based on morphological traits are for this and other cryptic groups and wether it is at all possible to identify these species bases on them.
This article is a summary of the current state of affairs with regards to the answer on that question.

The use of the term ‘the species’ in this article references to the first four species listed above unless specified differently.

Based on the latest scientific results it is not possible to determine the species based on morphological traits [2, 3, 4].

This is true for all sexes. Queens can be identified using a combination of pile and other traits. However the resulting species can only be assumed because with the exception of the pile all other traits have not been verified using DNA analyses yet [4].
Besides the the traits are not easily accessible in the field or on photographs which makes it impossible to use these identification methods.

The site Waarneming.nl uses the term ‘Aardhommel groep’ for females of the species (see here). This definition needs to be extended to include the males as well (I’ve informed Waarneming forum about this fact). kerfdier uses until further updates on this topic the terms ‘Aardhommel groep (West-Europa) / Bombus terrestris group (Western-Europe)’ that include the queens, workers and drones.

A recently introduced method to identify all bumblebee species, including the subject species in this article, relies on wing landmark analyses [7, 8].
The applied scan method requires a frontwing to be removed from the specimen and uses software to perform statistical calculations on the wing scan. This makes the method unapplicable in the field and/or on photographs [7].

This chapter summarizes the usual morphologische traits used in determination and their status after comparison with DNA identification.

All traits can occur in the species of the Lucorum complex, with the highest chance for B. cryptorum [3, 4]. The overlap of the traits between species is significant and there cannot accurately identify the species [3].

Rasmont describes a list of differences in form and details of body parts, however all of them have not yet been verified using DNA analyses and are therefore unreliable [3, 5]. Also most of these caharacteristics are not visible in the field or on photographs [5].

The traits mentioned for queens also apply to workers [5]. However the pile color and S-shape are more unreliable than in queens [4].
The shape of the labrum and punctuation of the 2nd tergites seem promissing traits that need to be validated with DNA research.
For B. magnus workers the yellowish hair on the 1st tergite is a trait that needs to be further investigated [4].

The color of the facial hairs was a primary trait for the identification of males, but turned out unreliable as it overlaps due to large variation between the species of the Lucorum complex species [4, 5].
Additionally the males of B. terrestris have black facial hairs, a trait that overlaps with a B. cryptarum male variant that has similar colored facial hairs.

Possible other drone traits that are used but not yet validated by DNA research are [6]:

4 Bossert, S. (2014). Recognition and identification of species in the Bombus lucorum-complex – A review and outlook. 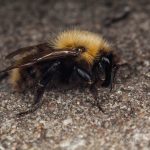 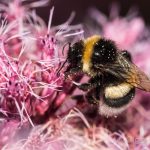 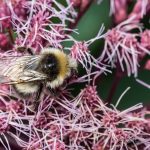