The motive for writing this article was a discussion on the Waarneming.nl forum about an observation of a Common wasp (Vespula vulgaris) missing it’s abdomen. The discussion revolved around the nutritional value of body parts as the primary reason why they were or were not cut off. One of the standpoints stated a general preference for the thorax over the abdomen, which was also my point of view.
I have observed among other instances how Vespula vulgaris cut up a bushcricket and left with the thorax with head attached, see the photograph in this article and the observation here.

However I realised this could be an implicit assumption and so after a quick round through the available literature a more nuanced image emerged for the reasons for cutting as well as possible preferences for body parts.

This article provides an overview on the cutting behaviour of wasps based on the indicated literature sources.

Many adult female wasps, both the queens during the startup phase of the colony as their worker offspring, are predators that catch other insects as prey for their brood [1,9,14]. The males play no role in provisioning and do not catch prey [1,9,12].
The prey is caught, killed and than transported to the nest. Before transportation the wasp may prepare the prey by cutting it. Not all wasp families do this, some will always transport their prey whole [4,15]. The difference in behaviour whether to cut a prey or not has, as often is the case , advantages and disadvantages that are exploited by the specific groups. It turns out wasps cutting prey have a broader spectrum in prey size available to them, whereas the non-cutting groups usually catch small prey and therefore maintain a high degree of speed and manoeuvrability [4].
The remainder of the article will focus on the first group.

The following species inhabiting the Netherlands use cutting behaviour according to the literature:

The genera of prey-cutting wasps contain a number of obligate social parasitic species whose queens do not produce workers themselves but instead make the host workers work for them [9,12,13]. The parasitic queens as well as their queen daughters do not forage prey for food but instead consume nectar and honeydew (Vespula, Dolichovespula) [9], nectar and treesap (Polistes) [9] or treesap (Vespa) [9].

The parasitic species of these genera inhabiting the Netherlands are:

Some of the cited species inhabiting the Netherlands that do not cut their prey, although prey mutulation may occur during catching for example a part of the antenna or leg is removed [15], are:

After catching the prey the wasp will kill it, normally by biting in the neck (cervix) of the prey which usually results in decapitation (Vespula vulgaris en Vespula germanica) [1,3,7]. In rare occasions will the wasp use its stinger for example when the prey tries to break free from its grip [1,8]. Hornets (Vespa crabro and Vespa velutina) even do not seem to use their stinger when handling large prey [9].

After killing the prey the wasp will either take the whole prey or prepare it for transport by cutting it in pieces. The key here is the size of the individual wasp in relation to the prey. Each individual wasp has a maximum lifting capacity it can generate with it’s flight apparatus. If the combination of the wasp and the load she wants to lift is higher than that maximum she will not be able to lift off [2,3,4,5] .

Initially the wasp will try to fly away with the prey whole, but when unable she will manipulate the prey weight by stripping away the appendages like legs, especially the larger middle and hind legs [6], wings and cerci [1,2,3,4,6,9,10,11]. If that still isn’t sufficiently reducing the weight she will separate the abdomen and thorax by biting the connection between them [3,7,11]. This process is a learning process so eventually the wasp will get better in judging whether the prey needs preparation before transporting [1,6].

This manner of cutting does not optimize for weight, so the resulting load usually weighs less than the maximum she could carry [3,4]. Probably time and energy conservation are more important as an optimal load would often require cutting through the thick body parts themselves [3].

The prey is transported in one of the following combinations [3,6,7]:
– whole
– head and thorax
– thorax and abdomen
– head, thorax or abdomen separately

They show a clear preference for thorax and abdomen over the head [6]. Probably this is more efficient for the wasp as its lifting capacity is better used [6].

Some species ( Vespa velutina [10], Polistes dominulus [11] ) will mince the collected part first into a meatball, malaxation, before starting transportation towards the nest.

After cutting the prey the wasp will transport a part to the nest. The discussion point is whether or not there is a preference for a particular part, thorax or abdomen.

In case the wasps are dealing with a Honey bee (Apis melifera) prey they tend to have a light preference for the thorax and abdomen compared to the head and an equal preference for the thorax and the abdomen [3,6].
For other prey families the thorax is preferred (Vespula vulgaris & Vespula Germanica [6], Vespula pensylvanica & Vespula atropilosa [8], Vespa crabro & Vespa velutina [9,10]).
Two Vespula species that do not inhabit the Netherlands, V. pensylvanica en V. atropilosa, show that, especially when dealing with larger prey like grasshoppers, also the head, the abdomen or the sometimes even a leg can be taken and in spiders always the abdomen [8]. All wasps will cut a large prey into pieces and collect them one by one [9].

Some wasps amputate parts of their prey using the mandibles. The spiderwasp genus Auplopus cuts the legs of its spider prey immediately after capture [16,17], probably for easier transportation [17]. [PEETERS e.a.] reports this group also cuts the prey in pieces and transports each piece through the air [16], I did not find any other references to this behaviour. One observation does mention Auplopus carbonarius taking of in flight with a whole prey, with amputated legs, instead of dragging it over the substrate which is another common used method of transportation [18].
This article also mentions another genus Agniella, which does not occur in the Netherlands [19], amputating the spider’s legs but than pulling the body over the substrate.

The genus Dolichurus amputates parts of the antennae of cockroaches, for currently unknown reasons [16]. 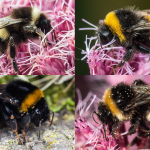 B. terrestris group
background and definition 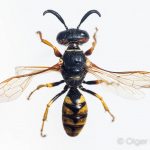 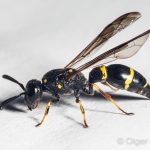