G. erythrostomum [1] is found across the lower half of the Netherlands and is a rare species [2].
It is a permanent resident in the garden and can be found every year on the bee hotels in alternating numbers. Usually there are at least two females simultaneously active, males are less common and will occur with single individuals.
In 2020 I have recorded five simultaneously active females and two males. I think this is directly related to the large amount of Chelostoma rapunculi bees that were active in the garden, and especially in the bee hotels, in that year as well, see this post.

The species is active from May to August [2,3].

Van Achterberg reports that the species is seldom active in May [3], however in the garden it is active from the end of May.

Gasteruption wasps are parasites and infiltrate nests of bees, where the wasp larva will develop [3].

The females are usually found on the bee hotels or hovering in front of sun warmed walls. The males fly in the vicinity of the females or elsewhere on sunny or less sunny spots. They are clearly capable of detecting the presence of a female, also when she’s no longer there. I’ve observed the female on the introduction picture of this article that rested on a branch of Verbena bonariensis. After she had already left for some time a male appeared that was clearly interested in that particular spot and kept hovering around and close to the branch but never landed.

The female has an ovipositor that she uses to deposit her eggs in the host nest.
The female use bee hotels as well. In order to find a suitable nest to infiltrate the female will hover in front of the nest site under construction and smell it out. When she has found a proper site she will land next to it and release her ovipositor out of the protective sheaths.
She will than stick the ovipositor down the nestshaft first followed by the abdomen. In my own observations the body followed next and she completely disappeared in nestsite, and have not observed that she only uses the ovipositor to penetrate a sealed nest. Normally she will keep the large part of her body outside the nest [3].

The female in the movie below remained approximately 10 seconds in the nest before emerging again.

Directly after leaving the infiltrated bee nest she will clean and put the ovipositor back into the protective sheaths.

The pollen on the thorax of this female show that she has been in a bee nest.

The adult Gasteruption wasps feed with nectar and/or pollen and show a preference of plants from the following groups [5]:

Gasteruption are parasitic wasps on bees [3,4]. There are no clear relations known with wasps [4].
The larvae can start as egg predator or as ectoparasitoid on the larva, and continue as cleptoparasitoid on the remaining food supply. When that does not provide enough food it will continue to parasitize the next cell [3].

G. erythrostomum parasitizes on bees from the subfamily Megachilinae [3,4], with a preference for Chelestoma.
The following hosts sited in literature occur in the Netherlands [4]:

Within the garden different species from all groups occur, but from the specifically species cited the following have been observed:

Chelestoma rapunculi bees nest within the present bee hotels in the garden. I have twice observed directly how a female G. erythrostomum infiltrated  na C. rapunculi nest with free ovipositor (see also chapter 3), which is a possible indication that an egg has been deposited [3].

Gasteruptidae are easy to recognize by the elongated neck, the swollen hindtibia and the highly attached slender abdomen [3].

Only the Gasteruptiidae group have the swollen hindtibia the function of which is unclear. Research has shown the tibia is filled with fat. This may have a function to increase sensitivity  to detect prey in potential nesting sites, or is used to increase balance during flight and hovering. The latter aspect has been tested and shown that wasps with the tibia removed have more difficulty to make turns [6].

The hypopygidium is located at the underside of the abdomen near the tip.

5. Hindtibia relatively wide with ivory coloring at the base [3]

3. Hindtibia and tarsus more or less black or darkbrown [3]

4 PARSLOW, Ben A.; SCHWARZ, Michael P.; STEVENS, Mark I. Review of the biology and host associations of the wasp genus Gasteruption (Evanioidea: Gasteruptiidae). Zoological Journal of the Linnean Society, 2020. 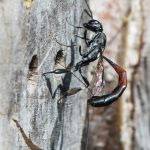 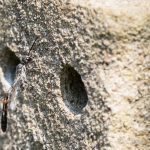 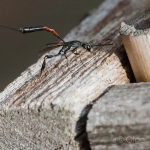 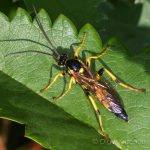