This is the only overwintering Ancistrocerus species in the Netherlands, and therefore easy to identify early in the year [2]. The other species follow from May.

She uses the bee hotels to built her nests.

Taking a small break on a sunny wall…

This female start to nest in one of the blocks.

When she started bringing in caterpillar preys I put myself in a strategic position to photograph and… time and time again I was focussing on the wrong nest entrance. Finally I decided to mark the nest so I could not go wrong and… she went in another hole again. It turned out she was working on two nests in parallel.

After some obeservation time it turned out that, I think, she was filling one nest cell with caterpillars, then closed it with mud and switched to the other nest to start filling it with mud to create a cell.

Everytime she went out to start a mud flight she would first fly to a hanging flowerpot with a collecting tray nearby the nesting block (directly behind me) to drink or collect water.

It became apparent that she only did this before starting a mud run, not before hunting caterpillars. this makes me wonder if she collected the water in order to make the mud more liquid so it could be easier to transport. The mud is transported as a ball between the jaws.

On one occasion she slipped and fell into the water, and as she seemed struggling not to drown I helped out.

In order to make death by drowning a little less likely I put a piece of dead wood into the water which she happily used on the next water collection rounds.

This occured all at the end of the day and after the final mud flight she made some short flights to elsewhere in the garden and returned to crawl backwards into the nest for the night.

A nesting block further away, another female was inspecting a potential nest location. 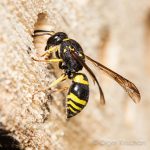 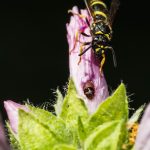 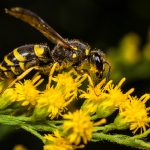 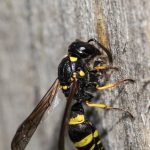