From behind the kitchenwindow I saw this female Holly blue (Celastrina argiolus) that showed great interest in the Great burnet (Sanguisorba officinalis) plants near the pond. She fluttered among the sphere-like flowers and had landed on a few before it hit me she was laying eggs.

In the end I was able to localize three eggs, one of which was probably flushed away by a summer rain a few days later.

After my adventures with the Long-tailed blue I expected the larvae to dig into the flower butts but to my surprise after fifteen days I found two tiny, fat, flat worm-like larvae, and for sure they were 2nd instar larvae!

Unfortunately they disappeared after some days obscuring their further development from the camera sensor. 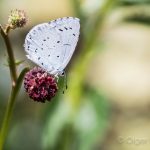 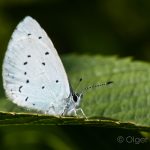 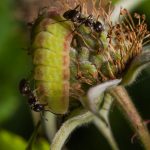 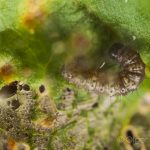